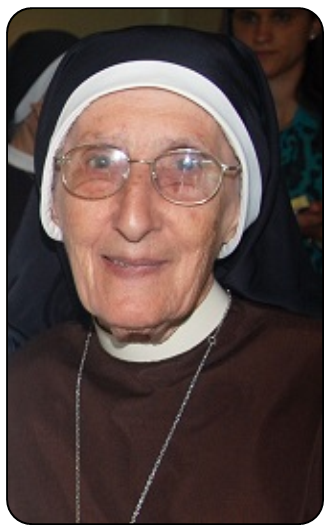 Renewing our faith in the Risen Christ, in whom we place our certainty and hope, we announce with pain, but with gratitude, that on September 5, 2021, at 11:50pm, in the Hospital São Marcos, in Nova Veneza – Santa Catarina – BRAZIL, the Celestial Spouse received in His arms,

with 93 years of age and 73 years of Religious Profession.

Sister Inácia (Amelia) was born in Nova Veneza – BRAZIL, on February 14, 1928. Sister Inácia, daughter of Nova Veneza, since in her young age, knowing the first missionaries, she felt attracted to Religious Life, so much that she tell her father that she also wanted to be like them to help people. She joined the Congregation on February 3, 1945, with 16 years old. Sister Faustina Oldani as the local Superior welcomed her in the Congregation. Superior General at the time was Mother Giovanna Zonca. Her novitiate mistress was Sister Aurelia Omarini. She made her Religious Profession in January 21, 1948 in the Chapel of the Institute Sagrada Familia in Nova Veneza – Santa Catarina.

Sister Inacia was a religious of prayer and sacrifice. She found in God the strength to every day mission. Her simplicity and goodness was woven by a great love. In fact, from the beginning of her Religious Consecration she stretched out her arms to welcome the life that vanishes in nursing homes, the growing life in day care centers and colleges, and life that is born in the maternity hospitals. She was an excellent midwife, admired by doctors and nurses. According to witnesses, it was common for Sister Inacia to spend sleepless nights to be beside a pregnant women, assisting them in the most delicate moments. The next day, she would worked, normally, as if nothing had happened. she was really dedicated, altruistic person, without personal interest, she acted without being noticed. Everything was done in silence and in prayer: Everything she could In the one who strengthened her!

From 1950 to 2013, she exercised her mission in the Hospitals of: Três Pontas and Campos Gerais, both in Minas Gerais, Nova Veneza, Imbituba and Sombrio, all in Santa Catarina; in the asylums of Seniors from: Laguna – Santa Catarina; Campos Gerais and Elói Mendes, in Minas Gerais; in orphanages from: Pinheiros, in Sao Paulo and Três Pontas, in Minas Gerais; at Colégio Pio XI, in Rio de Janeiro. Yes, Sister Inacia was the Angel who silently walked through the corridors and rooms of hospitals and she could bring good words, smiles and comfort to the sick. She worked tireless!

In 2014, in her advanced age, she ended her mission in São Marcos Hospital and made part of the Community “Casa São José”, both in Nova Veneza. However, she continued her silent mission distributing the medication to the weak sisters in the Community. Her testimony of tireless selfgiving, during all these 73 years, greatly enriched the history of our Congregation. On this Sunday September 5, 2021, the flame of her life went off and, in silence, at 23:50, the Lord took her with him, leaving a great legend in the hearts of all of us.

Sister Inácia, your fidelity was like a fertile seed that gave life wherever you went.

Many people will  miss you! May the angels sing your faithfulness in favor of life!

For all this and more, we are grateful to our God for life and selfgiving of Sister Inácia Zanelatto in our Congregation.

The funerals will be celebrated on Monday (06/09/2021), time to be arranged and then the body will be buried in the Cemetery of Nova Veneza – Santa Catarina.

In fraternal communion of prayer, united with all the Sisters of the Providence “Mother of the Divine Province”, relatives, friends and so many people whom she helped. Let us surrender Sister Inacia to Jesus, her beloved Husband.

(from the Card of the 50th celebration of Religious Profession)

REST IN THE PEACE OF THE LORDR!